Above the law: America’s abortion-trafficking-pornography enterprise

So here we are again—faced with another blatant example of the unholy alliance between abortion, sex trafficking, and pornography. As growing evidence shows, all three are intricately connected. Pornography creates the demand for sexual exploitation and trafficking. Trafficking creates the supply for the pornography industry, and the act of abortion helps the vicious cycle continue, allowing all three industries to grow, profit, and cover up crime.
We are willing to pursue the Christopher Johnsons of the world (unless, of course, you’re Jeffrey Epstein), but what about the participation of pornography and abortion in this evil enterprise?

A willful neglect of accountability

Planned Parenthood and other abortion providers have worked for over a century to infiltrate legitimate healthcare in America and convince our culture that the killing of a pre-born child is a common medical procedure akin to removing one’s tonsils. Yet, evidence shows that abortion providers:

Abortion is not healthcare: Refusal to address a public health crisis

According to the HHS’ Office of Administration for Children and Families, human trafficking “is a public health concern that impacts individuals, families, and entire communities across generations and requires training and a response from communities, social service providers, health care providers, and other first responders.” The American Public Health Association agrees that our health system “plays an important role in identifying and treating victims of human trafficking.” The National Conference of State Legislatures reports that health care providers are often the first professionals to have contact with trafficked women and girls. A 2016 report in the Health and Human Rights Journal revealed that 30 – 88% of trafficked persons access medical services at some point during their exploitation. Healthcare providers are on the front lines of this battle.
States have created task forces and working groups that encourage coordinated efforts among health care providers, law enforcement, justice departments, and child welfare agencies. Many of these efforts are modeled after the Trafficking Victims Protection Act of 2000 and supported by training through the Stop, Observe, Ask and Respond (SOAR) to Health and Wellness Act of 2018 and the Department of Homeland Security’s Blue Campaign.
Despite the growing network of support and cooperation in the healthcare field, the abortion industry refuses to actively participate in the solution, even though they constantly promote abortion as “women’s health.”
Most major health care organizations have released official statements on human trafficking. But you won’t find Planned Parenthood or any other abortion provider on that list. Why?
Consider what the HHS Office on Trafficking in Persons has to say:

“Just as abolition of chattel slavery in the historical development of the United States required a restructuring of society, long-term solutions to prevent and eradicate human trafficking will require changes in social norms and other deeply-rooted structures that may be hardest to change…We need to energize public health’s role in the fight against human trafficking because the field has a fundamental belief that life can be improved and societies can change even in the midst of seemingly entrenched interests.” 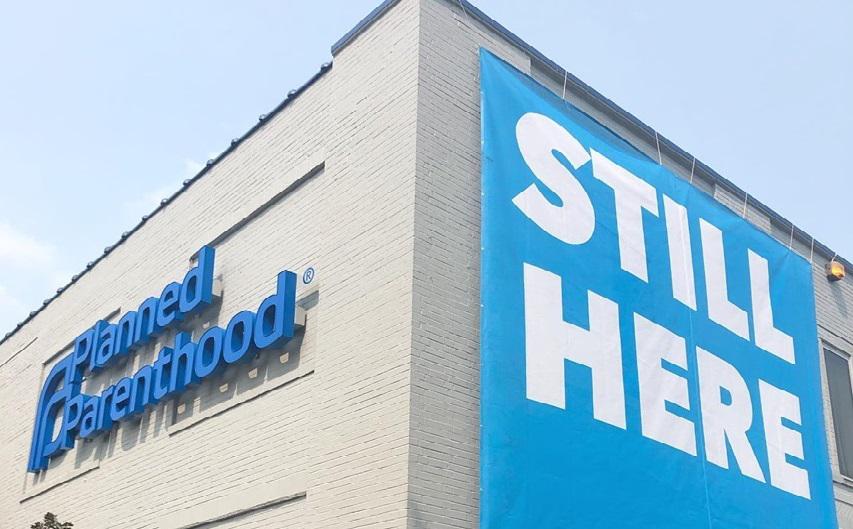 Abortion is not healthcare: Refusal of duty as a mandatory reporter

The federal Child Abuse Prevention and Treatment Act (CAPTA) mandates that each state have provisions or procedures for requiring certain individuals to report known or suspected instances of child abuse and neglect, including sexual exploitation and trafficking. According to the HHS’ Administration for Children and Families, mandatory reporters include (among others) those who work at abortion facilities under the auspices of health care: physicians, nurses, healthcare workers, and counselors. These providers have a “duty to report” all suspected and confirmed abuse of any person under age 18 to state Child Protective Services and local law enforcement.
There are multiple legal cases in Arizona, California, Colorado, Connecticut, Minnesota, and Ohio involving Planned Parenthood’s documented failure to report the sexual exploitation and abuse of minors. These cases go beyond the undercover videos Live Action produced, revealing Planned Parenthood’s willingness to cover up child sexual abuse, aid traffickers, and claim that a few “rogue” workers were to blame.
These are civil and criminal cases brought against Planned Parenthood for its negligence as a mandatory reporter.
According to a 2014 study from the Annals of Health Law, “the prevalence of forced abortions is an especially disturbing trend in sex trafficking.” Survivors who participated in the study said they had significant contact with clinical treatment facilities, most commonly Planned Parenthood, while being trafficked. They also reported that traffickers often chose Planned Parenthood to provide services because “they didn’t ask any questions.”
In the case of Christopher Johnson, who allegedly exploited the 15-year-old victim on Pornhub and took her for an abortion, the state of Florida is very clear on its mandatory reporting requirements [see page 8 of this report]:

Abortion facility workers, who insist they are healthcare providers, are considered mandatory reporters. But according to the arrest report in the Johnson case, no one—repeat, no one—fulfilled their legal duty to report a 30-year-old man who accompanied an underage girl for an abortion.
Had the abortion workers at this facility seen the Missing Juvenile Alert that, according to the arrest record, the local police department released to the public en masse in February, 2019? In March, had they noticed all the flyers the National Center for Missing and Exploited Children created and distributed throughout Broward County and places the victim frequented? 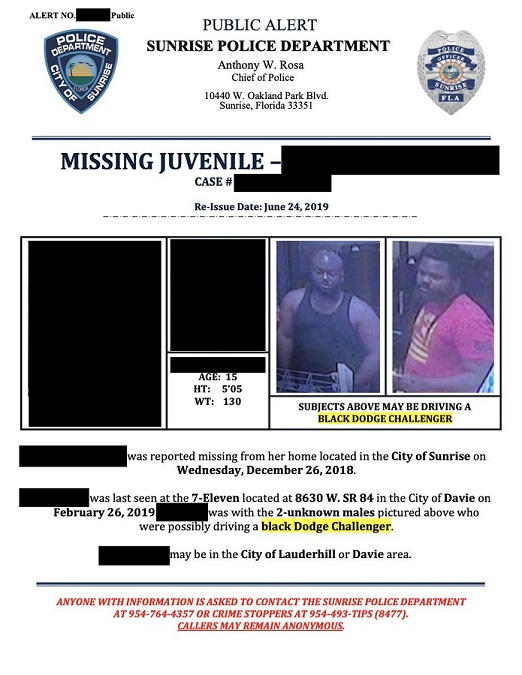 Abortion is not healthcare: Refusal to notify parents under the law

The abortion workers in Broward County, Florida, neglected their legal duty to comply with Florida’s Parental Notice of Abortion Act. This law requires that abortionists give notice to a parent or guardian of a minor that an abortion will take place—at least 48 hours in advance for in-person or telephone notice or 72 hours in advance for written notice by certified, delivery-restricted letter. Proof of parentage or guardianship is required, and the notice must be documented in the minor’s file.
Proof couldn’t have possibly been produced in this case.
If staff at the abortion facility followed this law, they would have been prohibited from aborting her child. Even if the trafficker managed to forge identifying documents for the girl, he couldn’t have proven his legal guardianship, and the victim’s mother would have been notified of the whereabouts of her daughter.
She likely could have been rescued from her trafficker earlier.
Planned Parenthood certainly knows about Florida’s Parental Notice of Abortion Act.  Its South, East, and North Florida regional branch instructs teens as to what is required before they come to its facilities. And Planned Parenthood, NARAL, NOW, and other pro-abortion organizations consistently oppose state-level parental notification and consent laws. They know these laws inside and out. 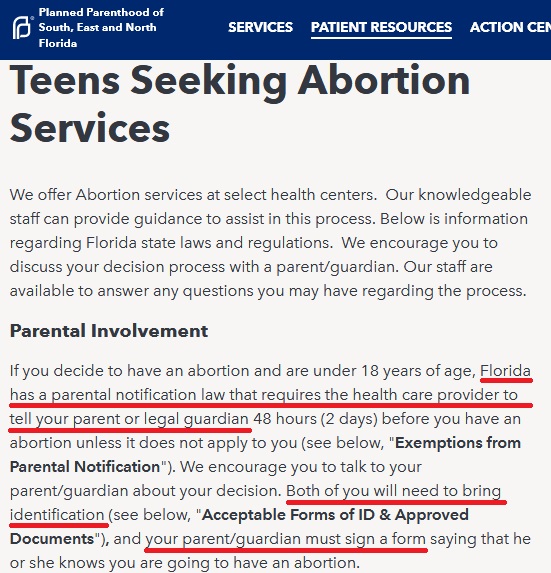 Yet, we see legal case after legal case of abortion facilities that do not follow these laws. What’s more, the abortion industry outwardly promotes the very industries that exploit women and young girls.

Abortion is not healthcare: Promotion of illegal vices

The abortion industry is part of the “sex-positive” movement, that is, the belief that any sexual activity is acceptable as long as it’s consensual. Generally, sex-positive advocates promote pornography as an empowering “choice” for women and support the decriminalization of prostitution, or “sex work” as it’s come to be known. At the same time, many of these same advocates work to reduce the age of sexual consent for minors.
Those who work to decriminalize prostitution, like recent efforts in Washington, DC, New York, New Hampshire, California, Maine, Massachusetts, and Rhode Island, seek to differentiate prostitution from sex trafficking so they can normalize and separate prostitution from the public’s strong opposition to trafficking. Perhaps even more concerning, however, is that these efforts directly coincide with a broader agenda to use public institutions to glamorize pornography, prostitution, and abortion to our youth. Read the Personhood Alliance’s report on this agenda here.
But many people are unaware that pornography is illegal, too.
Current federal law prohibits the distribution of adult pornography on the internet, on television, in retail stores, and through the mail because it is classified as obscene. According to the Alliance Defending Freedom:

“Obscenity is not protected speech, just like other forms of unprotected speech, such as blackmail, defamation, or child pornography…The U.S. Supreme Court has continually upheld obscenity laws against First Amendment challenges. However, the U.S. Department of Justice has chosen not to enforce existing federal laws against illegal pornography producers and distributors. This has resulted in an unprecedented rise in illegal pornography production and distribution in the last decade.”

Even though it is illegal and evidence continues to show its damage to marriages, families, society, and even the brains of its consumers, pornography is granted immunity by our government.

Politicians, bureaucrats, and judges signal over and over again that they do not believe the abortion industry is subject to state and local laws. Even though we pass laws that regulate abortion facilities, mandate parental notification, and require waiting periods, they’re useless if no one will enforce them or even investigate whether they are followed. Likewise, our federal and state laws that require mandatory reporting for child abuse, sexual exploitation, and trafficking don’t seem to apply to the abortion industry either.
So what happens when an elected official actually stands up to the abortion goliath? Pro-abortion advocates in our government go to great lengths, with the help of the media, to ensure the industry stays above the law.
Just ask Phill Kline. 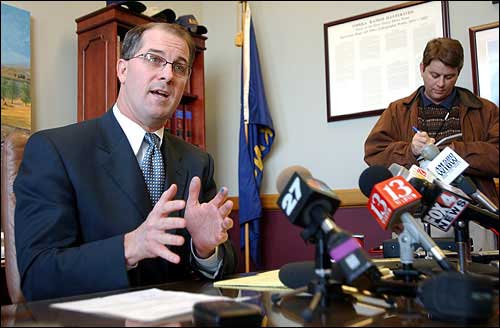 As the Kansas attorney general, and later, the district attorney for Johnson County, Kline conducted a broad investigation into child sex crimes that turned up connections with abortion facilities in the state. He endured a multi-year fight with then-governor Kathleen Sebelius (who would become President Obama’s HHS chief) to obtain the records from these facilities, which the Kansas Supreme Court eventually granted him.
The investigation led Kline to refer multiple potential cases to prosecutors in Kansas and other states, including a case against infamous abortionist George Tiller for failure to report child rape and for performing illegal abortions on up to 30 minors. Kline also investigated the Overland Park Planned Parenthood for failing to maintain adequate records—records that were eventually destroyed, which forced officials to drop 49 charges, including 23 felonies.
Kline was eventually barred from practicing law as a result of his investigations, a decision that he disputes as politically motivated. More details on this story can be found here.

Abortion at all costs

If abortion workers are healthcare providers, and abortion is healthcare, then we must ask some serious questions:

Staff and volunteers at pregnancy help centers and community health clinics across the country are working to become part of the solution. Hospital and medical clinic personnel, school counselors and nurses, and childcare providers are, too.
Why does the abortion industry refuse to comply, and why do our politicians, bureaucrats, and judges allow them to get away with it?
The reason the abortion-trafficking-pornography enterprise is so powerful, lucrative, and untouchable is because many of its accomplices are also its consumers.

The Personhood Alliance is calling for an official investigation into whether the Broward County abortion facility aided in the trafficking of the 15-year-old victim in the Johnson case. As this case moves forward, we are calling on Florida Attorney General Ashley Moody to stand up to protect children who are abused, exploited, and trafficked and those who are killed by abortion to cover up crimes. Florida Attorney General Ashley Moody must investigate all those who participate in the victimization of minors, including abortionists and their staff who refuse to comply with federal and state laws.

The abortion industry must no longer have immunity from crimes against children.
*The Personhood Alliance made repeated attempts to identify the abortion facility in the Johnson case, but none of our calls were returned by local law enforcement.
~~~~~
Sarah Quale is president of Personhood Alliance Education, founder of Educe® online learning, and author of the Foundations online pro-life curriculum. She is an award-winning curriculum and instructional designer who has worked for over 20 years in corporate, academic, and ministerial environments.

5 Comments on “Above the law: America’s abortion-trafficking-pornography enterprise”