~~~~~
In her letter to Florida’s Commissioner of Law Enforcement, Richard Swearingen, Attorney General Ashley Moody lays out the reason her office is calling for an investigation into the abortion facility in the Johnson case:

“In order to fight this atrocious crime [human trafficking], it is important that we not only catch the predators preying on our young and vulnerable, but that we hold accountable businesses and individuals legally required to report such misconduct who fail to do so.”

In October of 2019, Christopher Johnson was charged in Broward County court with a felony count of lewd and lascivious battery of a victim 12- to 16-years-old. Johnson is accused of uploading nearly 60 videos to Pornhub and similar websites depicting the sexual assault of a 15-year-old girl. The girl was rescued after being missing for almost a year. The arrest report notes that Johnson took her to get an abortion, killing the child who could serve as evidence.
My investigation into this case in March of this year prompted a partnership with LifeSiteNews to call for justice for the victims and accountability for the abortion industry.  The Personhood Alliance created a LifePetition to urge Attorney General Ashley Moody to launch an investigation into the abortion facility in this case to answer the following questions:

The Personhood Alliance is deeply grateful to Attorney General Ashley Moody for calling upon law enforcement to launch an official investigation into whether the abortion facility aided in the trafficking of the 15-year-old victim in the Johnson case. In her letter to Commissioner Swearingen, Moody also writes:

“It appears that the victim’s family had no idea where the victim was or who she was with, was actively trying to find her, and otherwise acting inconsistent with a parent having notice of a pending abortion or a location where their daughter could be found. More troubling to me is the fact that it appears that a thirty-year-old unrelated male took a minor to the provider and no report of abuse or neglect was apparently triggered.
It appears that further investigation would be warranted to ensure that the provider did not enable the further exploitation of the victim in this case. I would request that your agents conduct a further investigation into these facts and pursue those facts wherever they may lead.”
[emphasis added] 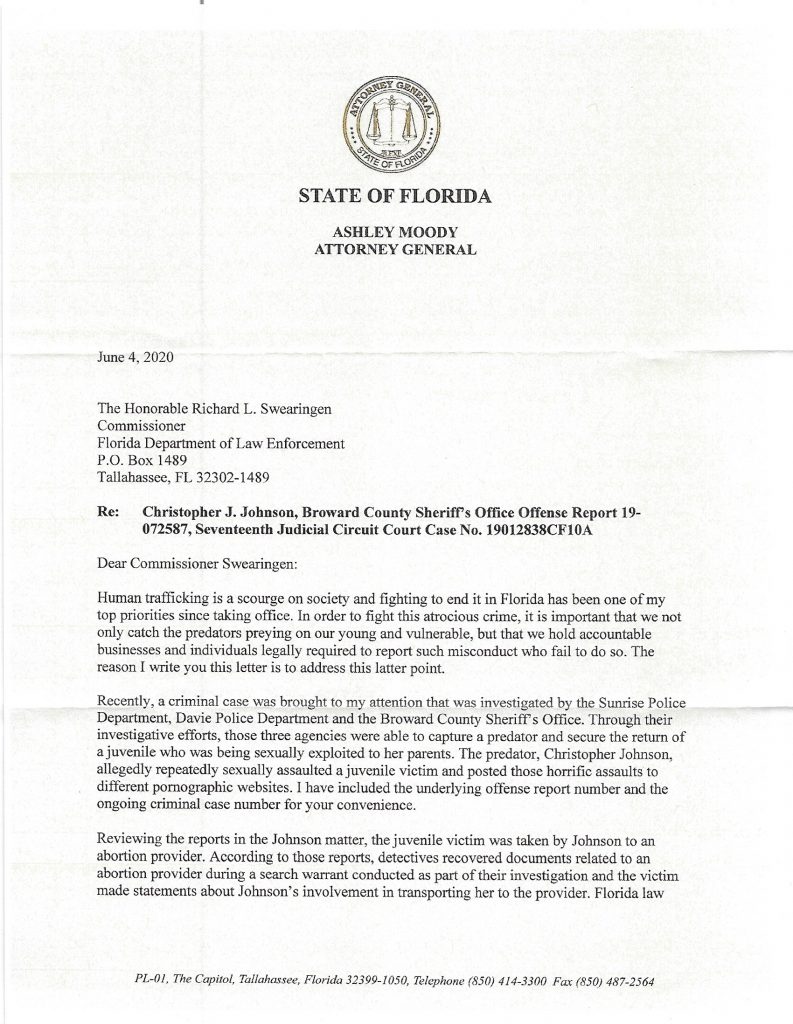 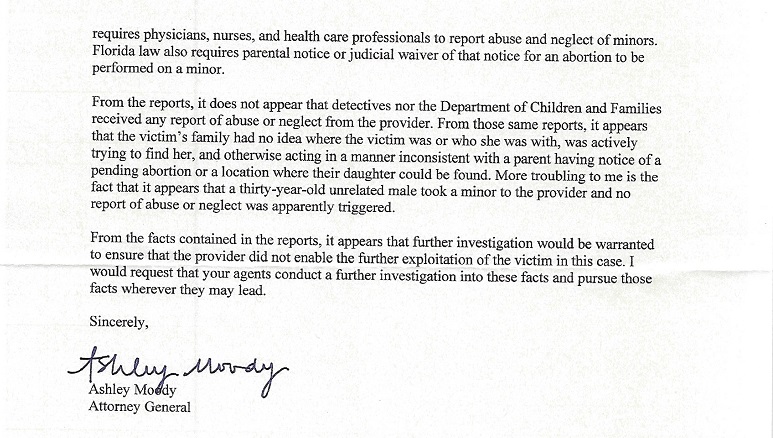 I applaud Attorney General Moody in standing up to protect children who are abused, exploited, and trafficked. State attorneys general across the country should follow her lead and investigate all those who participate in the victimization of minors, including abortionists and their staff when they refuse to comply with federal and state mandatory reporting laws to help rescue trafficking victims. And let us not forget the innocent children who are conceived and then killed while their mothers are trafficked.
Be sure to read our report Above the law: America’s abortion-pornography-trafficking enterprise to learn more about this case and equip yourself to call for action when similar circumstances arise in your own state.
Sarah Quale is president of Personhood Alliance Education, founder of Educe® online learning, and author of the Foundations online pro-life curriculum. She is an award-winning curriculum and instructional designer who has worked for over 20 years in corporate, academic, and ministerial environments.

← In the wake of June Medical v. Russo: A new strategy
Vaccines in Colorado: Informed choice or forced mandate? →